What was I Thinking?

One question I often get from someone looking at one of my abstract paintings is “what were you thinking when you painted that?" This is a question I can't entirely fathom. What is anyone ever thinking when they are intensely engaged. Could be this is the state that the yogi's refer to as one-pointedness (there it is right at the top of my head) although that is another mystery. 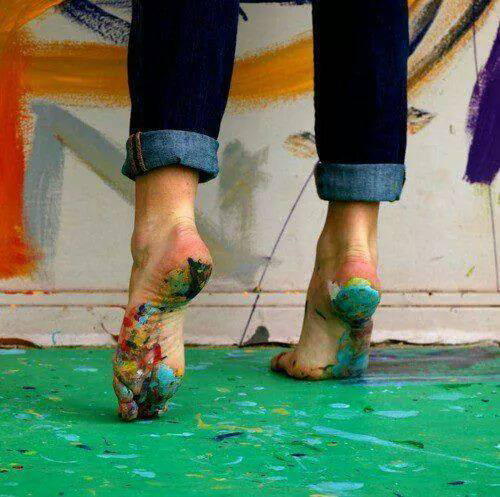 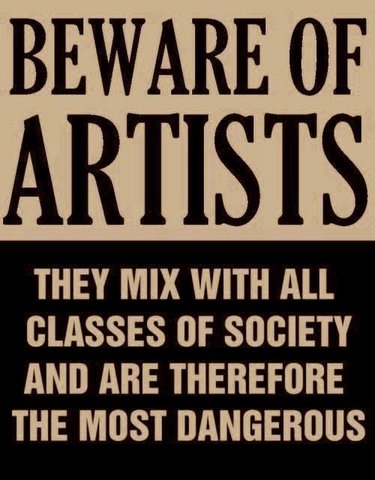 Actual poster issued by Senator Joseph McCarthy in the 1950's at the height of the red scare.

I'll try to describe what happens when I'm painting. Unveil the deep secrets of the inner space of the creating artist. First I need to dispel the stereotypical misconceptions surrounding the artist's circumstances. Often we are not lazy, sloppy, intoxicated or late-sleepers. Could be we are dangerous as Senator Joseph McCarthy warned in the fifties.

Quite often artist's have astonishingly challenging budgets which is why we wear those funny clothes from the Sally Ann. Shabby chic is just an absence of credit card privilege. Usually our homes and studios are an interesting mix of archeological digs and beautiful bits.

So now picture this, I enter the studio already half covered in paint from previous sessions in the studio and underneath the paint, dressed like a dust bowl farmer. I cower briefly in the corner and very nearly have to sit down when I realize what I have just extemporaneously proposed to do. It's no wonder to me that these canvases I have laid out appear enormous. Georgia O'keefe referred to the bare white canvases lined up against her studio walls as 'the hopefuls'. Those are the most intimidating because they are as yet full of infinite possibility and it is finding one's way through all those choices that is the most exciting and also the most daunting.

I never have a plan when I start the piece. But I do try to have some paint on hand mixed up in plastic soup dishes. Generally, unless I am impatient to just start painting, mixing color is the first ritual. Color to me is a mysterious thing. Only three primaries but out of those, like a kaleidoscope cornucopia, can be made millions of colors, shades, and tints. When I first started painting, I had a deck of designer colors on thin papers of just hundreds and hundreds of colors. To get lost in those colors was a revelation. Sadly they have somehow vanished from my life leaving only memories stained with possibility.

Mixing colors may take hours even though I am trying to limit myself to a certain palette. If I am enchanted by blue at the beginning of a session, I will only mix first the absolutely perfect color of blue and then colors that will go along in harmony. I sometimes have the color of a certain object in mind when I think 'blue'. Maybe I am remembering that old crystal perfume bottle my mother had on the dresser...Evening in Paris, was it? Or maybe it is the faded indigo of an old pair of jeans that starts me vibrating.

So that was the easy part. Now I am a soldier in the battlefield ready to lose all for the sake of my patriotic passion. The danger is not entirely imaginary as going into battle with a paintbrush is high stakes in the realm of energy and spirit. But of course my wounds will more than likely not be fatal and sometimes I don't even need to attack. It can be more of a peace negotiation with the visual elements. So I face the demons and try and remember to chant in Sanskrit, a phrase I got from a journal once, that I think means something to do with the idea of just standing back and letting it happen as it wants to. This is another part of the ritual. So now although there are no bounding or binding rules, I am merely led. Something happens while I look at the peaceful canvas and see what it needs to be radiant or transcendent or merely powerful. And then I try to facilitate that. 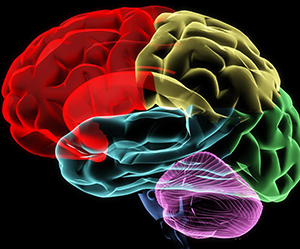 I think oh my god, that color is singing so brightly but it is too powerful to take over the whole canvas I'll need a smaller brush now it's too much of a shape and needs to be part of the whole surface so maybe a bit of green will stop it from being a bully does it need to be thin or thick what about pouring a little medium over the edges to keep it more transparent there oh my god the paint is already drying in that corner I have to be quick maybe a little hazing with the plant mister not so much that it will blur any lines I want to draw yes maybe some deep purple skinny skinny lines no I don't like that I'll just whisk that a bit to soften it and blend the whole mess with a few wild swoops with a large brush I'm exhausted have a look at what's happened already oh there's a really nice area but it doesn't work with the rest of the painting what about a sacrifice paint it over with a cadmium orange that was a mistake the color has died there now the whole thing has gone down like a card castle what to do a bit of scraping might allow me to add something less complimentary didn't I have some lime green from yesterday god all of my brushes have been lost amongst the cans of paint they're drying out need to make a move fast think I'll try throwing down some softer blues and see if I can work them into the not so good parts have to push push for something good like climbing a mountain in thin air wow that was a nice effect have to unify more so the piece hangs together maybe draw into the paint a little more define some verticals is this a horizontal piece I'll have to see it on the wall tomorrow let this layer dry now and tomorrow I'll figure out what I did.

But the piece needs to be something other than paint on a canvas so I will come back faithfully day after day until that magical moment when it becomes. “Through the green fuse drives the flower.”