Who Were the Irascibles? 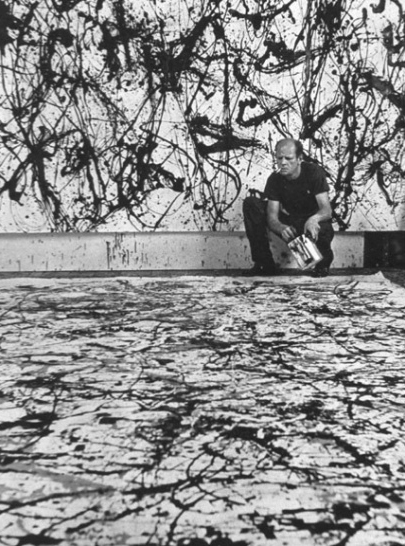 "I think of painting without subject matter as music without words."
-Kenneth Noland


Pollock slams his whiskey down on the table beside him in his shanty studio and stares blazingly at the canvas unrolled at his feet. He thinks he sees outlined in the fluid drippings of color, the suggestion of a woman's body. It's not his wife. He's sure of that. He is at odds with Lee as usual and knows the tracings on the canvas vaguely simulate the body of a young art student that has crept into his mind not yet to his bed. “Not in my work”, he mutters because at this stage of his output image is not allowed, and savagely attacks the canvas with a series of mad whirling streams of liquid color flung from a stick. First blue, then red oxide, then white, black, brown. Concealing any suggestion of the nude body that had appeared projected from his hot, fertile mind. Fuzzily he hears a car coming up the driveway of his rustic acreage on Long Island in the Hamptons.


“Afternoon Jackson” shouts the intruder hanging out of his side window, beer in hand, cigarette dangling limply. Pollock doesn't answer so he lowers himself flaccidly to the ground and shuffles toward the open doorway of Pollock's studio. Pollock grunts through the spaces on either side of his cigarette, “I'm workin' here.” Harry, the visitor has dropped by on the way home from his garage where as a mechanic he drinks hard liquor in the back while he fiddles with greasy parts under the hoods of beautifully curved cars of the 1940's and early 1950's.

"How's the Olds runnin'?" asks Harry. Pollock stops spilling paint onto the canvas and goes back to his whiskey for some large gulps of liquid fire which go down without a wince. Unlike Pollock Harry notices that Pollock is rippingly 'bombed'. Swirling the remains of his whiskey around the ice cubes in his glass Pollock replies about the running order of his swell Rocket 88 convertible which he loves in some indescribable way but does not look away from his canvas. Suddenly in a surge of energy he drips and spills and pours in a frenzy. A glass container of paint drops to the floor and breaks. Pollock, barefoot, is dancing around the canvas in a drunken rapture and there is blood mixed with the stray paint on the floor beside and around his canvas.

Who was the most irascible of the irascibles? 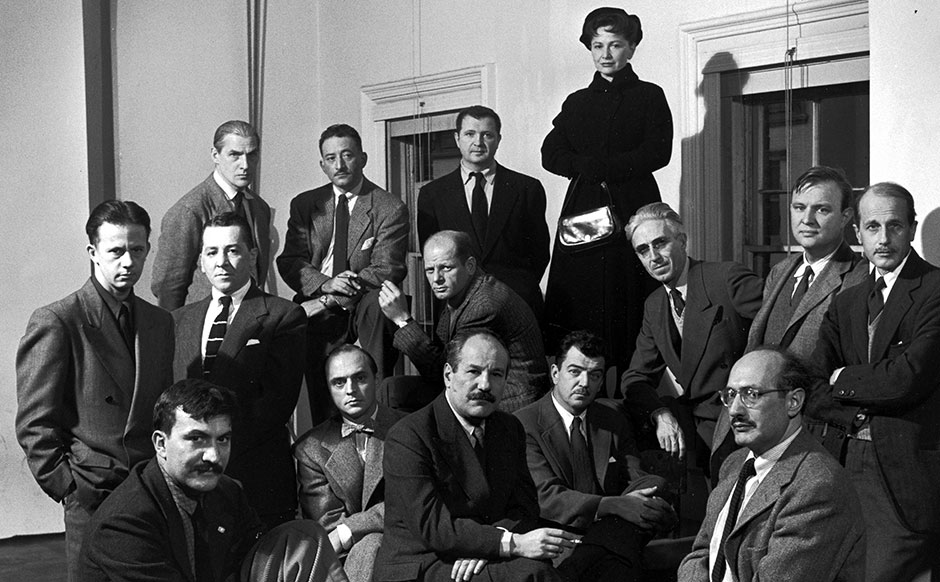 
In 1950 a group of eighteen affiliated New York artists who were becoming known as abstract expressionist painters wrote an open letter to the Metropolitan Museum of Art rejecting the museum's exhibition, American Painting Today, boycotting the accompanying competition because it refused to include them on the grounds that their art was 'unhuman'. Double irony, a picture of the group was published in Life magazine giving them the desired notoriety and bestowing upon the group the name: The Irascibles. Pollock had made a special trip to be included in the photo and although as a group they look like bank tellers, Pollock might have been most irascible, going his own way in his cowboy boots, never painting a 'copy' of a Pollock, and preserving anything he thought was pure and original in his work.

Jackson Pollock was the youngest of 5 sons born to a mild-mannered sheep farmer and surveyor. He worked with his father surveying around the rim of the grand canyon and later painted with the great Mexican muralists. When he moved to NY in 1930 he must have received some attention for his Wyoming cowboy appearance as he continued to present himself that way even though he had never done the work of a cowboy. He was beginning to culture a mystique that soon included some perilous behaviors. In time, he naturally translated the sense of experienced space from the canyons and the murals to his canvases which were executed on the wide open spaces of unstetched canvas unrolled on the floor--so that he wouldn't feel confined, fenced in by the edges of a prepared rectangle. 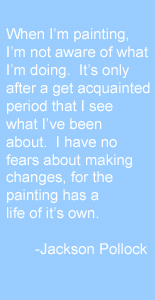 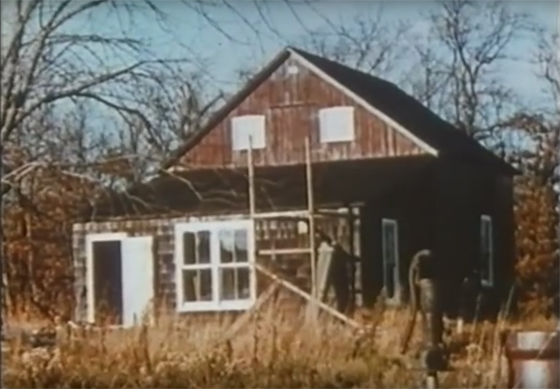 In 1942 Pollock met Lee Krasner, his future wife, as they were both preparing to exhibit work in the same show. With a partial loan from Peggy Guggenheim who had recently commissioned one of his paintings (the critic Clem Greenberg referred to it as exalted wallpaper) for her apartment foyer, Pollock and Krasner bought 5 acres on Long Island complete with a greying shingled house from 1879. Pollock has been transplanted from the Greenwich Village milieu to the country life but the lifestyle is still in the manner of Hemmingway – big drunken artist parties almost every night.

Krasner trying to be helpful and possibly to ingratiate herself to the taciturn Pollock, invited Hans Hoffman, painter and instructor, to see her husband's work. “You are painting from your heart! You should be painting from nature!” Hoffman criticizes. “I am nature”, Pollock replies. But he is not pleased. He demands much from himself thoroughly denying accident in his work, and the pressure to be recognized is great but as yet no one champions his work. In Life magazine he has been skeptically profiled under the monumental and daunting headline: Jackson Pollock Is he the greatest living artist in the United States? 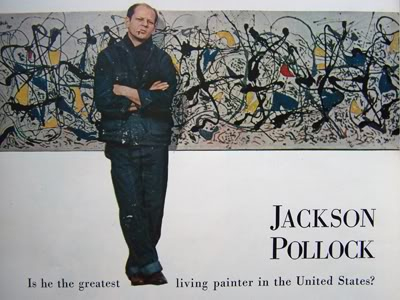 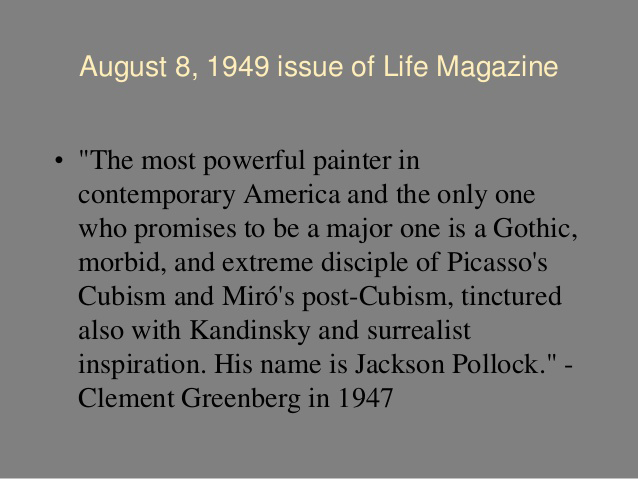 
“Hey”, Patsy Southgate (a neighbour of Pollock) says to the driver of the station wagon fondly known as the Flying Couch, “Let's not forget to pick up Jackson.” There is laughter in the station wagon because just like Patsy the other passengers are all going to New York to see their shrinks and they think it would be fun to have Jackson there to provide the drinks afterward. “Let's meet at the Cedar Bar”. From 1937 onwards, Pollock was engaged in psychotherapy for alcohol addiction. This may have helped him as he stopped drinking entirely for a few years and painted what the critics suggest to be his best works, such as Lavender Mist. 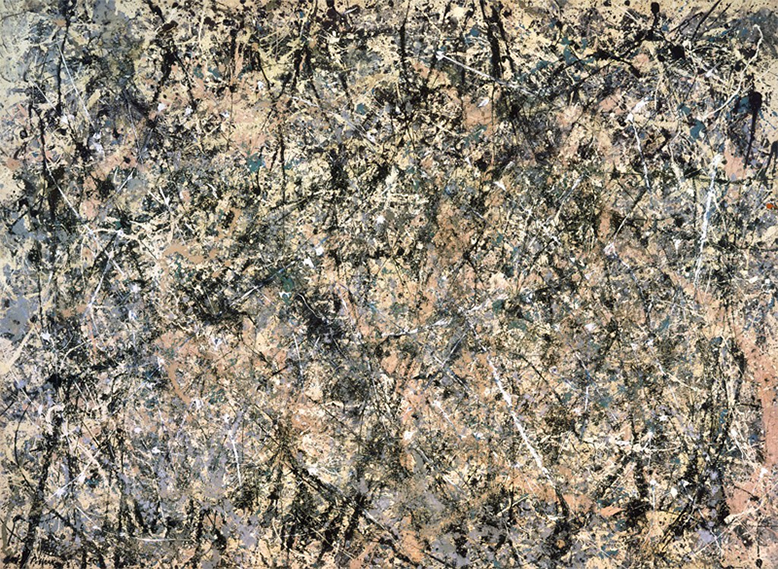 According to Pollock when he's at the top of his game, there were only 3 artists: Picasso, Matisse and Pollock.

Then what happened? The photographer Hans Namuth arrives at the house. Pollock has given his permission to be filmed while he paints. It is a cold Thanksgiving Day in November, 1950 and Pollock has been 'performing' for the camera in his unheated studio, all the while thinking that he must look like a fool and the film is going to prove it. The single minded world is going to think any six year old can drip paint. What are the chances anyone will ever see how one after another the drips are symphonically connected and how the whole resonates with life and energy and feeling? He experiences a build up of tension and carries that with him to the kitchen table where Lee, the photographer and other guests are seated waiting for Pollock to wash up and join them for dinner. After three years sober Pollock locates a bottle of bourbon whiskey and drinks deeply.

“Sit down and eat now Jackson” his wife says nervously.
Pollock stands at the table and quietly says “now”.
Lee says “now?”
Pollock shouts “NOW”, picks up the edge of the table and upsets the table settings. Plates clatter to the floor and break into shards. And similarly Pollocks life is also broken into shards. 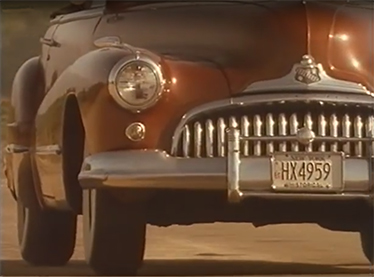 August 11, 1956. Lee is in Paris. Pollock picks up Ruth Kligman, the art student with whom he is now having an affair and her friend Edith Metzger. They decide not to attend the party they were originally going to and are cruising home in Pollock's Olds convertible. He has been drinking and this generally enhances his tendency to express himself through driving the car in certain expressive ways. He's driving too fast. Edith screams. Pollock laughs and hits the gas petal again pressing it all the way to the floor. The car swerves, crashes into a young oak. The tree rebounds from the impact throwing Pollock from the vehicle. His life is over at the age of 44.


Almost immediately and through the brilliant business acumen of his widow, Lee Krasner, the price of Pollock's work begins to double, triple, quadruple...And lifted along were the other irascibles whose work in New York City initially drew a mere couple of hundred people. Now they had successfully established New York as the new world art hub and they were the center of it.

Jackson Pollock the irascible cowboy and sacrificial lamb of the abstract expressionist movement.

NOTE: This article is based on fact embellished by imagination.
Who Were the Irascibles? copyright2016 wendy skog
Resource credit: Phaidon Jackson Pollock Documentary by Kim Evans